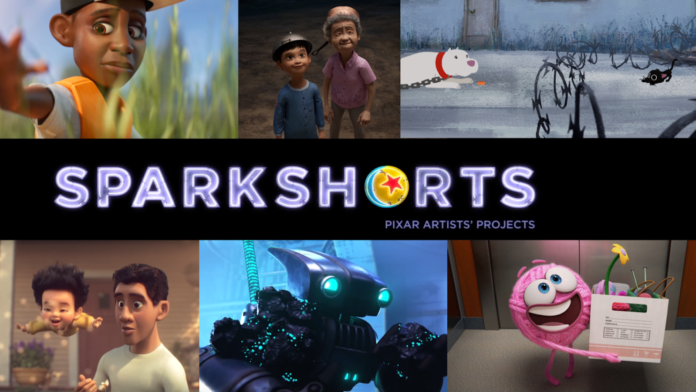 Over the many years that Pixar has been around, we have been enjoying their movies and their short series relating to their most famous movies like Cars and Toy Story. We have also enjoyed a lot of short films that tell a story and carry a heavy message. Now you can start watching SparkShorts on Disney+.

SparkShorts is a series in which Pixar employees are given just a few months and limited budgets to develop these cute animated short films. Until recently, they were released on Pixar’s YouTube channel, but they will start being pushed to Disney+ from now on.

The short animations that Pixar artists created so far are already included over on Disney+, and you can check them out. The most recent one is called Float, and it tells the story of a father who tries to hide his son’s ability to fly from the world. When the cat is out of the bag, and everyone knows that his son can fly, he must choose between going on the run or accepting his son as he is.

When and Where to Watch SparkShorts?

Up until now, SparkShorts films were released on YouTube, but they have now moved to Disney+. The most recent episode of it, called Float, was released on November 12th, 2019, along with the launch of Disney+. A new episode called Wind is expected to be released on December 14th, 2019, and another one called Loop will see the light on Disney+ on January 10th, 2020.

How Can I Live Stream SparkShorts?

Although watching Pixar films over on YouTube was great, it makes sense for this need to move these creations over to Disney+ so they can monetize them before they air. Therefore, if you want to watch SparkShorts, you’re going to need to have a Disney+ account. Subscribing to Disney+ is relatively cheap, and it will cost you $6.99 per month or $69.99 per year. Since the platform has already been launched in the United States, Canada, The Netherlands, Australia, and New Zealand, you will find different prices depending on the country you are in. Start your 7-day free trial on Disney+ today!

If you want to install Disney+ on your device, you are lucky because there is a dedicated app for most of these platforms, including Roku, Apple TV, Android TV, Amazon Fire TV, Chromecast, Xbox, PlayStation 4, as well as iOS and Android phones and tablets. (Note: You should be aware that not all Disney+ content is available in all markets, so you should check your own library to see if SparkShorts is there.)

Here is how you can set up your Disney+ account and begin a 7-day free trial:

How Can I Watch SparkShorts When Traveling Abroad?

One of the things that live TV or streaming platform users have to face every day when traveling outside of their countries is their inability to access the content. Even if you pay for a subscription on these platforms, they cannot allow you to access your account when you are abroad, due to various licensing deals they have. The issue can be fixed quite fast if you simply use a VPN to change your IP address so that you appear to be back home. When it comes to recommendations, we can direct you towards ExpressVPN, which is one of the best on the market, with servers in most countries of the world, including the United States, Canada, The Netherlands, Australia, and New Zealand. Furthermore, it also comes with some strong privacy features that will keep your data safe.

Here’s what you have to do so you can watch SparkShorts when traveling outside of your country:

Are There Other Ways That I Can Watch SparkShorts?

Well, some SparkShorts are available to watch on YouTube if you search for them, but new episodes are supposed to be exclusive to Disney+. Therefore, the best bet for you to be able to continue watching this really great Pixar short animations is by subscribing to Disney+.

Which SparkShorts film do you like best? Drop us a note and tell us all about it in the comment section below the article. Share it with friends and family so they can find out how to watch the cool animations too. Follow TechNadu on Facebook and Twitter so you can read more tech news, guides, reviews, and interviews.

Dating App “Heyyo” Exposes 77000 Users From All Around the World

How to Watch ‘Lady and the Tramp’ Online – Stream the...