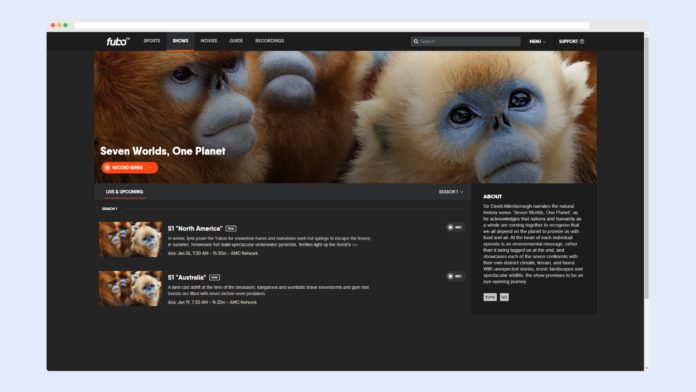 After offering 4K live TV streaming for sports events over the past year, fuboTV will also stream lifestyle and entertainment programming in 4K, starting with BBC America’s Seven Worlds, One Planet.

Up until now, fuboTV has only offered 4K streaming for soccer, football, basketball, car races, and more. Even next month’s Super Bowl LIV is on the 4K list, which is great news for those hoping for some quality content. Now, with their expansion into entertainment and lifestyle programming, fuboTV takes a new step to securing users who want to be able to enjoy the full quality their devices can support.

BBC America’s Seven Worlds, One Planet is narrated by the famous Sir David Attenborough and focuses on nature aspects from seven continents. The documentary will tell the story of the seven continents and how they shape the animal behavior and biodiversity of today. According to fuboTV, the episodes will air on Saturday nights in HD and will be available to stream in 4K the following day through BBC America’s video-on-demand folder.

While the BBC documentaries are going to be available in 4K now, more entertainment programming will be announced in the coming weeks featuring the same quality.